The Telyscopes left Virginia and now sing out of Philadelphia. Not to be confused with the flavourless emulsion cheese of the UK. The Telyscopes are anything but. Flavour aplenty here. We have two tracks from Richard’s favourite go-to band of the moment. Sequencer driven indie guitar thrashing track that opens up the show and their Beefheart-esque show closer. However. more than the really quite excellent The Telyscopes, Tobin brings SHY Martin to the show. This prompts Richard to reflect on his own life experiences.

Relationships are rarely smooth running but Richard is so long in the tooth that he’s a pretty sage old bear these days. Drawing on personal recent experience of family breakups between two people who ought to know better, this track brings to the fore his feelings on such.

Tobin has a New Music Shot Double Header this week, and the latter part of it is the quite remarkable The Motor. It’s the latest track from The Wants and heralds an imminent LP which is currently having us in raptures here at Record Box HQ. You’ll understand exactly what we mean when you hear it. Speaking of Tobin, he indulges his vintage side and his alter ego of Professor Gramophone by relaunching the ’20s with his choice of Bessie Smith. Really, it shows what a powerhouse music really is that this track still has the ability to enthralling after all these years.

Unfortunately Richard missed his opportunity to chat with Jack Hubbell of The Telyscopes this week. There is hope though. There are numerous releases due from The Telyscopes this year and Jack and Richard are going to catch up on this later in the year. We’ll get that conversation on the show real soon. In the meantime this is what The Telyscopes have been described as:

Telyscopes is an experimental Indie, Twee, Psychedelic Pop and Rock Band, currently located in Philadelphia, Pennsylvania. Started as a solo recording project by Jack Hubbell in his hometown of Alexandria Virginia, The Telyscopes have self-released 9 albums, 6 eps, and two exclusive remix compilations since 2012.

Taken by Canadians - a close encounter of the third kind 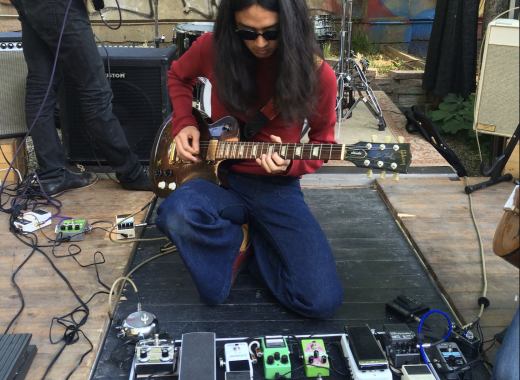